From London to Delhi

Flying from London to Delhi is a relatively straightforward journey. The flight is approximately 8 and a half hours long and there are plenty of direct flight routes available.

It’s undeniable that landing in Delhi from London can be quite a culture shock if you are someone less travelled. You may feel that London’s air quality is rubbish – wait until you breathe in Delhi’s!

My partner and I landed in Delhi around midnight and despite the smog, were extremely excited to start exploring this bustling city.

The sounds of Delhi

To say Delhi is a mad house is an understatement.

Everywhere, and I mean everywhere you go is dominated by crowds. However, it’s not just the dense population that surprised me; it was more so the noise.

Something that I found incredibly amusing as I manoeuvred the streets of Delhi, was how often the local drivers used their horns. In fact, a few of our drivers used them on totally empty residential roads for no apparent reason at all, which always got us laughing.

We found the constant car horns funny, that was until I tried to fall asleep and realised our quiet side street was also apparently a Harley Davidson repair shop after the hours of 1am, which pushed my enthusiasm for motorcycles to the extremes.

How to get around in Delhi

We had only planned to stay a few nights, as Delhi was a whistle stop before travelling to Aggra to see the Taj Mahal, so we decided to hire a driver to see as many sights as we could all in one day.

Delhi is a city of two halves, Old and New. Our driver dropped us off at the edge of Old Delhi next to the Red Fort and instructed us to get onto a manual TukTuk, which is essentially a bicycle with a sofa on the back – comfy and cheap!

Cars aren’t allowed in many parts of old Delhi, especially near the spice market, which is where we were headed. This is because the streets are far too narrow, so the only mode of transport is by your own steam, a scooter or TukTuk. 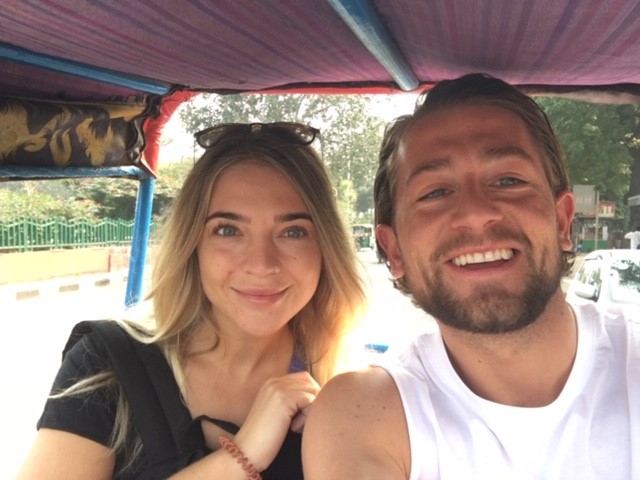 Old Delhi Spice Market and surrounding markets remain a largely unspoilt snapshot of pre-colonial India, which is perfect for those who want to experience the ‘real’ India.

The Spice market was huge, offering every spice, nut, herb or seed you could think of – and the smell was amazing.

We also managed to find the old Chilli Market in its heart, which is essentially a 6-floor ruined building with thousands of bags of chillies on each floor, ready to be packaged and shipped around the world.

The roof of the Chili market also gives a spectacular view of the Red mosque and the market itself. My partner and I took full use of these views and made sure to get a few snaps for Instagram!

If there’s one thing for sure, you’ll never run out of activities to do or see in Delhi. We wanted to squeeze as much in as possible so spent an entire day travelling between the key sight-seeing spots.

One of the first landmarks on our itinerary was The Jama Masjid, which is one of the largest mosques in India. This was an experience, as once we had hired appropriate clothing on the door, we made our way to the large outdoor square in the middle.

If you are camera shy this is not the place for you. Tourists are few and far between here and so we received the celebrity treatment with a frenzy of locals trying to take their picture with us. My partner was asked to have a photoshoot holding a newborn baby – which she found flattering more than anything!

Another stop on our itinerary was the famous stairwell to India. This set of stairs start down at street level and plummet to a few hundred feet below ground to an old unused well. There are a few of these stairways dotted around Delhi and famously were used in The Dark Knight Rises film.

We also made sure to visit the Lodhi Garden, which is a beautiful park that’s spread over 90 acres of land. You could spend a lot of time walking around the ancient ruins and appreciating the architecture. Or, you could use this garden as a prime picnic spot.

After all this sight-seeing, I asked our driver to take us somewhere local to experience some traditional Indian food. I did however emphasize not "too" local as his first suggestion was a biryani from a van on the motorway. Instead, he took us to a small restaurant called "Chimneys" which had the best curry I've ever tasted – try the Paneer Tikka!

India is still very much a cash economy, so having access to cash whilst on your trip is key. That being said, banks and ATMs are widely available in India, even in smaller villages, so seeking cash withdrawals should be relatively straightforward.

I used my Caxton multicurrency card and preloaded my holiday budget into GBP on my account. Whenever I needed cash, I was able to withdraw Indian Rupees from any ATM and my account would still be charged in GBP. It made sourcing money in India quick and extremely easy.

Overall, my trip to India was an unforgettable experience. Admittedly, it took a little while to acclimatise to Delhi’s busy culture, as it’s one that’s buzzing with noise, people and lights. However, once we had spent a night settling in, it was the most amazing trip. We love being introduced to so many aspects of Indian culture, from the food to the architecture.

On preparing to work for Harrow School in Hong Kong, on a short term contract, my bank account in the UK was unable...
Read More

When planning a trip down under, cities like Sydney, Melbourne and Cairns have long dominated the tourist scene....
Read More